I was very excited to see these caterpillars progress and I was amazed by the variability of their colors and tubercles. Due to the fact that this was a first time for me, I really had no idea what to expect from these caterpillars. Another piece of information I was given, is that the female in which these caterpillars came from was found in a “blend zone” of H. euryalus and H. gloveri. This blend zone is an area in the eastern sierra and western Nevada where these two species have been known to interbreed naturally and produce viable offspring. H. gloveri looks somewhat similar to H. euryalus with some minor color differences on the wings, but the caterpillars tend to have differing color traits. H. euyalus has white tubercles on their sides, while H. gloveri’s are blue. There was definitely some color variability like this in the caterpillars and because of this I am very excited to have some possible blending in the adults when they emerge next spring.

Almost exactly a week after the caterpillars molted into their third instars, they all successfully molted into their fourth. This fast progression was mostly due to the food plant (Madrone tree) and the very warm weather my area was getting. As an added bonus the caterpillars were also getting quite large and all had distinct variation of tubercle shape/color. No two caterpillars looked the same and the high amount of physical variation made this experience even more exciting to me. At fourth instar I was changing their food plants somewhat regularly but it wasn’t until they molted into their fifth instar was obtaining food plant for them an almost constant task.

This one had reduced tubercle length but were still noticable. 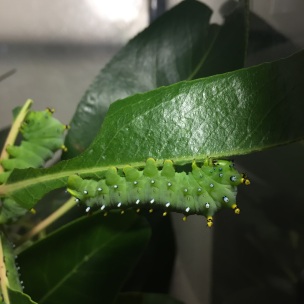 This was more of what one would expect the tubercles to look like on this species.

This one’s almost complete lack of tubercles was very extreme among the group.

Once all these hungry little beasts reached their fifth instar, they began to completely defoliate all the branches of Madrone tree that I would give them to eat. Within two to three days the branches I had placed in their cage were completely eaten away and I would have to cut more for them very quickly or else they would become stressed and possibly pupate early. Thankfully I never let it get to that point and they were always well fed, allowing for them to reach very large sizes (Some reaching almost three and a half to four inches in length). About a week or so after they went to fifth instar, they all decided to begin spinning cocoons at the same time.

This is what one should expect the average H. euryalus caterpillar to look like, except a little darker green in color.

The tubercles were strongly reduced in a few individuals. 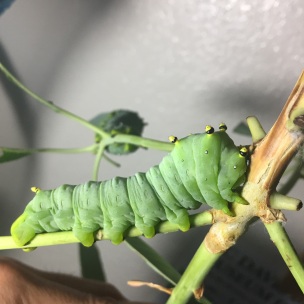 This is the complete opposite of what one might expect these caterpillars to look like. Its tubercles are non-existent.

The variation among the individual caterpillars was strongest at their fifth instar, which could have been indicative of the mixed genes from female who laid these eggs, being in the blend zone between euryalus and gloveri. Now that all of the caterpillars have successfully spun their cocoons, I am hopeful that there will be at least some kind of variation among the adults when they emerge next spring. This species only has one brood per year, so in order to see the adults one has to wait almost a full year. Due to the warm weather and host plant I used, these caterpillars finished their larval stage in about 31 days. I was very glad to rear these chunky green eating machines successfully for the first time from egg to cocoon. Now begins the long wait time before I get to see the adults and hopefully, when they do emerge, I get a good mix of both sexes.

About half of them decided to spin their cocoons on one branch.

All successful cocoons, now waiting to emerge next spring.