About twelve years ago, I visited the insect fair at the Los Angeles Museum of Natural History and bought some Ceanothus silk moth caterpillars. I was unsure of how to take care of them but I wanted to try anyway because they looked very unique compared to any other caterpillars I had ever seen before. Unfortunately, I was very unfamiliar with what I was told to use as a host plant and so I used the amount of food plant I was given until the caterpillars either spun cocoons or died. Due to my inexperience with this species then, one ended up dying and the other ended up spinning a cocoon. About a year later, the moth ended up emerging but it was very tattered by the time I had noticed it had emerged. This year I took the chance to try again, and this time I had all the resources necessary to make sure all the caterpillars were well fed and made it to their pupal stages.

At the beginning of May I was given about a dozen Hyalophora euryalus eggs from a friend of mine who had been rearing this species last year (2016). I was excited to start this species from eggs and hopefully get them all the way through their life stages. After about a day of having the eggs in my caterpillar cage, they all hatched at the same time. Seeing all these very tiny caterpillars brought me great joy and due to the warm weather my area was having, they began to progress very quickly.

I learned Hyalophora euryalus has a number of different possible host plants that one can use, ranging from pepper tree, strawberry tree, ceanothus, willow tree, manzanita, and madrone tree. I was told by a friend that madrone tree would allow for much larger caterpillars and faster growth than any of the other possible host plants. So, with this in mind, I found a reliable source of madrone tree in my area and ended up using it as their food plant for the remainder of their instars. 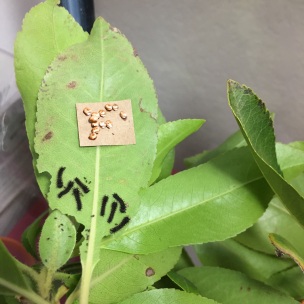 The euryalus caterpillars just after they hatched from their eggs.

They quickly began to feed as temperatures increased in my area.

Due to the fact that it was my first time rearing this species from eggs, every instar from first to fifth was new to me. The first instars are very small and completely black with small hair like spines and they began feeding on the host plant I placed in with them fairly quickly. Thankfully for me the weather was beginning to warm up fairly quickly and because of that the caterpillars grew at a much faster pace than expected. After one week since hatching, many were already starting to molt into their second instars. The second instar looks somewhat similar to the first except they are now a light yellow color. Thankfully I had enough food plant for them to get to their third instars, which didn’t take very long because of the warm temperatures in Davis. 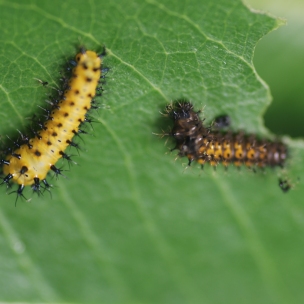 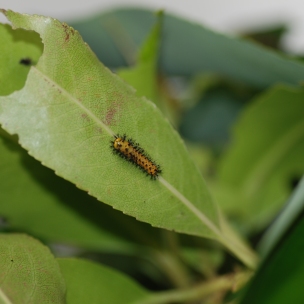 The second instars also ate quite a bit but not enough to change food plants just yet.

The change from second to third instar was much more dramatic than from first to second. The caterpillars had changed to a light green color and the tubercles on their bodies also gained color, but were still covered with small black spines. Their tubercles varied in size and length but what intrigued me the most was that some had very reduced tubercles to where they were almost non-existent. This trait became more prevalent in their fourth and fifth instars and was surprising to me due to the fact that all the photos I had seen of this species showed them having very prominent tubercles. I had learned that their long white tubercles on the sides of their bodies are meant to imitate parasitism and thus deterring any possible parasitoids from using them as hosts. 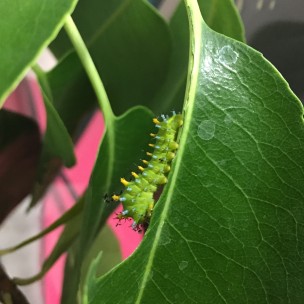 The tubercles on these little creatures were very colorful. 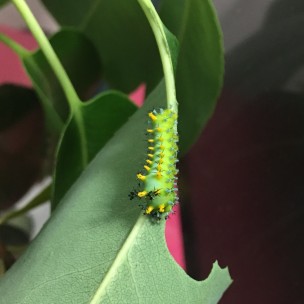 They began to finish the madrone tree more quickly at third instar compared to the other two instars.

Thankfully I only had a loss of two out of the twelve that hatched. Those that died showed signs of not performing well and possibly having a viral or bacterial infection so they were removed and thrown away immediately to prevent any others from suffering the same fate. I was told many stories of how this species is notorious for succumbing to many diseases so I kept a very vigilant watch on how they behaved and if they had any sudden changes to their eating habits, other than their pause in feeding just before molting. This species was very enjoyable to rear up to this point and only became more enjoyable as they continued to their later instars and eventual cocoons.