When looking for insects there are really no bounds to how far you can go and where you can look because insects can be found pretty much everywhere on the planet. Whether you’re collecting insects for research or for a personal collection, locating insects in the field is an adventure that can be enjoyed by everyone of all ages. Before you go on a bug hunt however, there are some key pieces of information you should always know about your destination and how to prepare for it.

First, you should learn what kind of habitat you will be entering and what insects are associated with it. Knowing what you might find in the area you are visiting is very helpful because it will aid you in associating certain insects with that area. You must remember that not every insect order can be found in the same habitat type. Second, you must have the necessary equipment needed in order to collect. There can be a wide variety of different types of insects in any given area and sometimes having an aerial net isn’t enough, so remember to bring other pieces of equipment like a sweep net, a beat sheet, or an aquatic net.

Lastly, you must remember to always mind your surroundings and make sure that you have any necessary field gear to protect yourself from the elements. Having a long sleeve shirt and long pants will prevent most things from getting to your arms and legs. A hat is always a necessity because I can guarantee that when you are collecting the sun will be out. Since insects really enjoy sunny warm days as much as we do, those are more often than not the best days to go and collect. Now that you know how to prepare for an insect adventure, you are ready to start your bug hunt.

When deciding on where to begin your adventure, keep in mind the type of habitat the insects you are looking for like to be in. If you are like me, then you would want to start in your own backyard. It is the easiest place to search for insects and you can quickly learn what is and is not there. Once you have become a master at identifying your backyard insects, you are then ready to move onto bigger and better bugs. But wait, there’s more.

One more piece of advise I always suggest is to pay attention to the time of year you are planning on collecting. I say this because a lot of different insects are present at different times of the year. So, the cool insect you saw in your field guide that you really would like to see or catch, may have you waiting a little longer than expected. Many insects are primarily emergent in early-mid spring, but others can sometimes be first seen as late as mid summer. Knowing where and when insects will be present is a very key part in field collecting.

When thinking about where to collect insects, I suggest a place with a lot of vegetation. Especially a  location where the vegetation is flowering, because many different families of insects can be found in areas where flowering plants are blooming. Many scientists, especially Entomologists, will be very conscientious of when flowers are blooming during the year. Flower blooms and new vegetation are very good cues for knowing when insects such as butterflies, bees, beetles, flies and true bugs, will be present in certain areas. 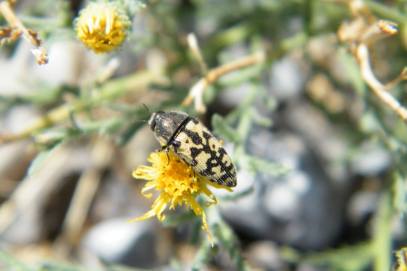 Small scarabs like this one were quite common among the wild milkweed flowers.

This Chrysomelid (Leaf beetle) was very well camouflaged among the small Aster species. 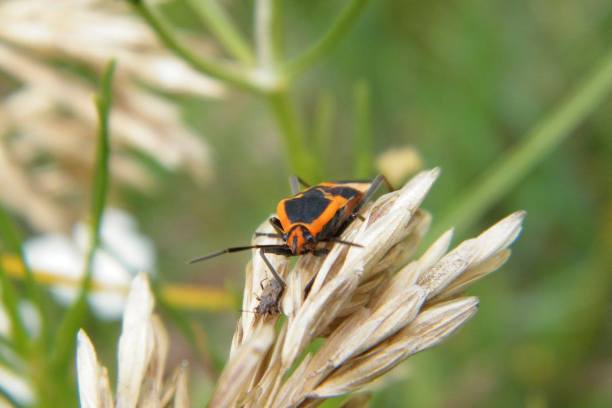 An example of this is when Lepidopterists are searching for certain butterflies and they use the blooming of flowers as a way to locate them. Different butterfly species will feed on the nectar from the variety of different flowers that are present in the area. Another way Lepidopterists locate specific butterfly species is by the host plant that the caterpillar of that butterfly feeds on. If you know what butterfly species you are looking for, you can most likely encounter it if you learn what its host plant is. For example, if you are in search of the Monarch butterfly (Danaus plexippus), then you will search for its host plant, which is milkweed. You will most often encounter the butterfly near milkweed and if not, then there is a chance you will see the caterpillar, which has a black, white, and yellow color pattern. So in short, if you are looking to collect insects and are unsure exactly when and where to go, any place that might have plants with flowers or have plants that recently grown new vegetation will be your best bet.

If you will be collecting in places that are much drier than others, such as the deserts of southwestern United States, then flower blooms and new vegetation growth is strongly based on large rain events. For places like the southwest an event happens in mid summer called the monsoons. When tropical type weather patterns bring moisture and humidity to the southwest it triggers a monsoon event. This is usually categorized by high humidity, scattered thunderstorms, and heavy rain. Once this pattern begins in the southwest, it brings new growth and color to the desert, as well as a plethora of different insects. So if you plan on collecting in any desert type area, then the best place and time to go would be in mid summer after the monsoonal weather arrives. If you are planning on collecting in a place similar to anywhere in California then you would have to be there a bit earlier

Since California has a Mediterranean climate, it will have cold wet winters and hot dry summers. If you plan on collecting in any of the habitat types in California, such as oak woodland, grassland, sierra foothills, desert, riparian woodland, and wetland, then the best time to go collecting would be the late spring to mid summer. The reason being is that by the later part of spring most if not all plants should have bloomed and grown new vegetation and by the early summer a very large majority of insects should have also emerged as well. So the best time to collect in any of California’s habitats is between mid April to late July, weather permitting of course.

When it comes to aquatic insects however, you may have to narrow your search to anywhere near a decent sized body of freshwater. Nymphal or larval stages of aquatic insects can be found many different types of water bodies including streams, lakes, rivers, creeks and ponds. All immature stages of aquatic insects will be fully aquatic, meaning they can only be found underwater. Adult stages however, will vary in being aquatic, semi-aquatic, or fully terrestrial depending on the order. Insects such as dragonflies, damselflies, stoneflies, and caddisflies will have fully terrestrial adults that can be found around freshwater but never underwater. Beetles and aquatic true bugs however, will have semi aquatic and fully aquatic adults and can be found both in and around different bodies of water. An example of semi-aquatic insect adults are those that live underwater but can fly to a new water source if necessary.

If you were looking to collect adults of aquatic insects that are terrestrial, then you would need an aerial net in order to catch them. For collecting semi-aquatic and fully aquatic adults you would need a different type of net called a kick net, which is used by moving underwater foliage or rocks with your feet so that whatever insects are present will end up in the net. Then you would bring the net up out of the water and place its contents onto a container or tub of some kind in order to see what insects you ended up catching. Once you have seen and removed whichever insects you would like to collect then you have successfully mastered aquatic insect collecting.

For most Entomologists and other scientists, field collecting is a great way to discover and learn about what species are present in any given area. Understanding when and where different species will be present is an important part in learning how the natural systems function and how we as scientists can help preserve the natural world. Collecting insects is just a small part in the larger picture of how insects interact with the world that they live in and its up to us to learn and teach others about how important these tiny beasts really are.