Over the “spring break” I set out on a camping trip to Anza-Borrego Desert SP for two days with my fiancé Melissa and her sister. This was the first time any of us had ever been to the park and we had no idea what to expect other than some blooming wildflowers. I had heard about this park from many friends of mine who had been there previously and they all gave it very positive reviews, stating that it was a spectacular place to go and explore. I had only learned about this state park last year after it had an incredible “super bloom” due to the immense amount of rain the state received over the winter months. It was unfortunate the winter was so dry in the area this year, but despite the dry weather I was still hopeful to see an interesting array of spring flowers at a much smaller scale.

When we arrived, we headed to the visitor center first to get some information about the park and to acquire directions to hiking trails. The visitor center had a wonderful display of desert plants, such as beaver tail cactus, hedgehog cactus, ocotillo, cholla and Palo Verde, almost all of which were in bloom. After partaking in some “touristy” activities, we finally ventured over to the Palm Canyon campground to set up our campsite and get ready for an afternoon hike. Since we had arrived early, our campsite was still occupied and would be until around 2pm, so we decided to go on a hike on the Palm Canyon loop trail to pass the time. 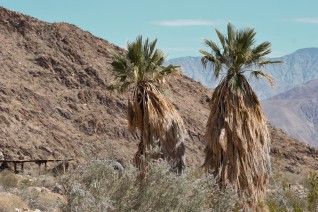 These small wildflowers were scattered along the trail into Palm Canyon. 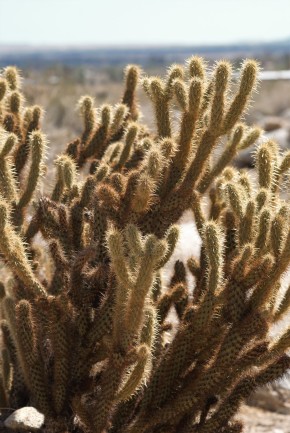 Cholla cacti were very abundant everywhere so we avoided them as best as we could. 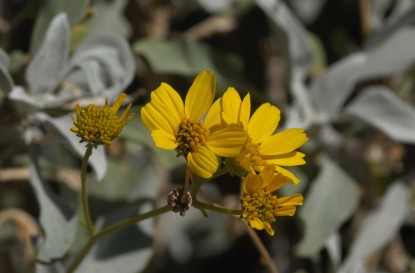 The brittle bush was blooming all over the canyon and near the campsite.

The creosote bush was also blooming up and down the canyon trail and campsites.

This cuckoo wasp (Chrysididae) was one of a few I saw trying to hide themselves among the very spiny cholla.

Another small wilflower I would encounter along the canyon trail. 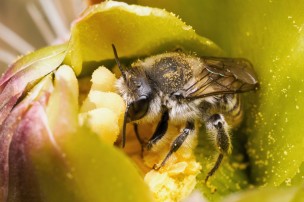 This andrenid, or mining bee, was very into this cholla flower, covering itself in pollen.

The hike was very mild, with only a few spots where we had to do a bit of scrambling over some rocks and a very slight increase in elevation. Along the trail I saw several flowering plants such as creosote bush, brittlebush, cholla, beaver tail cactus, and a handful of small wildflowers. There were a few small bees and blister beetles on the flowers along the trail but that was it as far as insects went. I didn’t expect much to be flying at since there weren’t too many nectar rich flowers around but of the insects I did see I was quick to get some photographs of them. 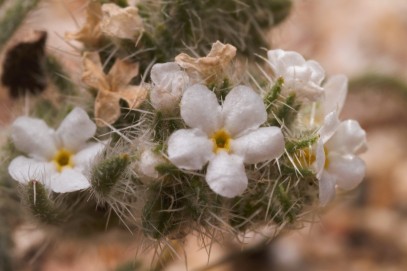 These flowers were very small but all the more beautiful.

Another small wildflower that was fairly common along the trail.

These flowers were a very vibrant yellow so there were hard to miss while on the hike.

This mining bee was obsessed with this flower, so much so that it would bury itself in it. 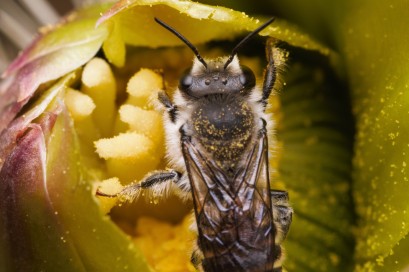 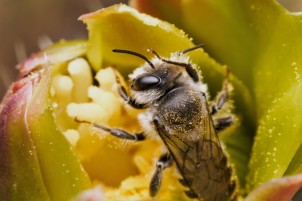 This same bee was covered in pollen and attempted to clean itself multiple times.

This bee is most likely a species of Perdita, hiding in the poppy.

At the end of the canyon interior was a very picturesque oasis area, with a pool of water surrounded by very large palm trees. What we learned about this species of palm tree is that it is the only native palm to the Western US and we were standing in its native habitat. This species of palm tree, Washingtonia filifera, is often called the desert fan palm or California fan palm and is primarily found in desert riparian habitats near both spring-fed and stream-fed oases. After taking a quick break under the palm trees, we headed back out of the canyon.

These clerid beetles were less common on the brittle bush flowers than the blister beetles.

Seeing these desert fan palms in their native habitat was very nice to see. 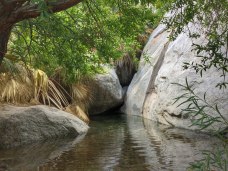 The oasis was finally found at the end of the canyon.

This sight of blooming brittle bush was a nice touch while hiking into the end of the canyon.

This stand of desert fan palms was the highlight of the Palm Canyon hike. 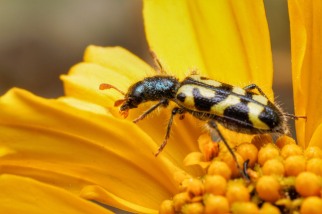 The clerid beetles I found have another color morph that is red, but I was unable to find it.

I took this opportunity to take some more photos of the flowering cacti, wildflowers, and insects along the trail as we hiked back to the parking lot. Of those insects was the red-eared blister beetle (Lytta auriculata), which are mostly active in this area during the spring between February-May. This beetle species was the most common among the insects I saw on the trail and seeing brittlebush blooming everywhere made sense as to why. Brittlebush flowers (Encelia sp.) are the favored food source for red-eared blister beetles and seeing all the feeding damage on almost every bush’s flowers confirmed it. Once we got back to my truck we went straight to the campsite and set up camp. We decided to call it a day and planned our adventure for the next day.

Lytta auriculata or the red-eared blister beetle was the most common beetle I saw on the hike.

Thorns of the very tall ocotillo that were scattered along the trail. 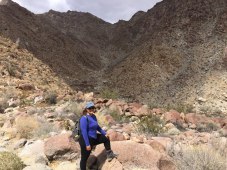 The brittle bush flowers are the absolute favorite food source for these beetles, which is why I saw them everywhere. 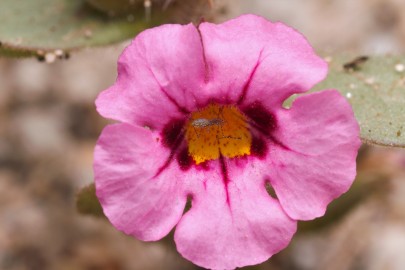 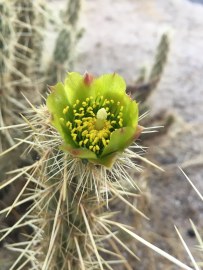 A possible Gander cholla that was blooming near the campsite.

The campsite was quite nice and also surprisingly quiet.

The next day ended up being rather short but very enjoyable. We had heard there was a slot canyon in the park so the plan was to hike through that area and then head back home. The directions to get to the slot canyon were very straightforward and the road to get to the trailhead was smooth to drive on despite being mostly sandy. The hike through the slot itself wasn’t very difficult and was also fairly short, although about halfway into the slot it did get very narrow. 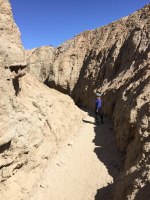 Melissa before entering the slot canyon.

The canyon narrowed in some parts, making it a little challenging to pass through. 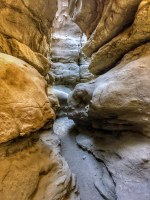 Parts of the canyon felt mysterious in some areas.

My introduction to slot canyons was a very satisfying experience. 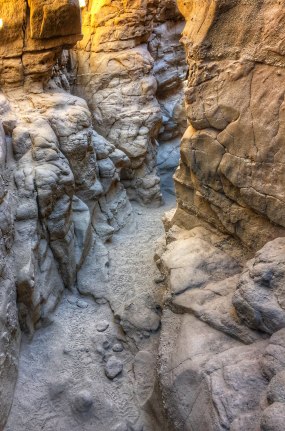