After a few months since my last nature walk through the UC Davis Arboretum, I decided it was time to see what was blooming and flying around at the start of the spring season. Unfortunately, there was an approaching storm system at the end of this week that ended up being very cold and rainy and my spring survey of the Arboretum had to be postponed until it was over. Thankfully, after the rain and gusty winds had subsided a few days later, the sun broke through the clouds and I used that window of time to do a quick survey through the Arboretum. Due to the clouds drifting by, blocking the sun here and there, not many insects were flying about. The ones that were out and about however, were slow-moving and easy to photograph.

Sunny with a Slight Drizzle

With clouds and rain approaching the Arboretum, I made a quick decision to visit the area for as long as the weather permitted. I had heard that there were many flowers blooming up and down the Arboretum, which to me meant that the potential to find insects out and about was fairly good. So, a good friend of mine and I made our way to the east end of the Arboretum, where majority of the native plants were blooming or still in bloom from the previous week. There were plenty of flowers I had seen previously and some that were new, but I was most interested in checking out the insects that were visiting these plants. To my surprise, there were plenty of insects buzzing around despite the light drizzle of rain and cooler than normal temperatures. This made the insects much slower and less flighty, making them way easier to photograph. 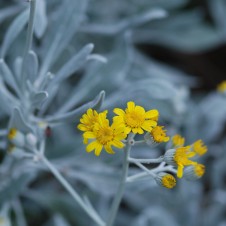 Some asters were just beginning to bloom. 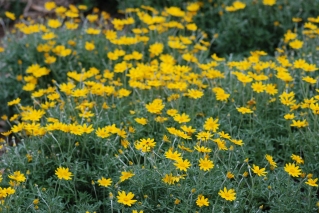 These blooming asters were everywhere.

These pink cora bell flowers were blooming in multiple areas around the Arboretum. 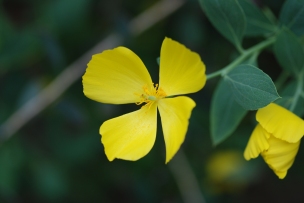 These tree poppies had flowers that were just beginning as well as just ending.

The California Poppies were nearing the end of their bloom.

Near the Wyatt deck, located on the east end of the Arboretum, I came across a large patch of what looked like cow parsnip (Heracleum sp.). On it were a plethora of different flies, mainly hover flies, but others were present as well. The number of different species of hover flies on these very large flowers was astounding and thanks to the relatively cool temperatures, photographing them was much easier than I expected. There was also a surprising number of Pipevine swallowtails (Battus philenor) flying about, but they were only around the area I was in once the sun came out behind the clouds. A number of plants were blooming in the California section of the Arboretum, including poppies, ceanothus, lavender, iris, violets, asters, and clover. Of these flowers the most vibrantly colored were by far the iris and violets.

This muscid fly was also partaking on what the flowers were providing. 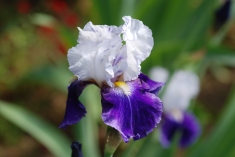 One of the many iris I saw in the Arboretum. 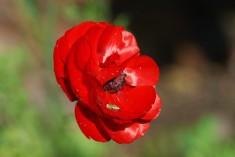 These flowers surprised me by how red they were. 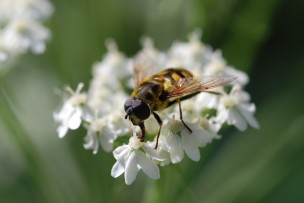 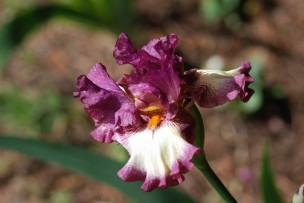 Another iris but purple this time.

As I walked further down the path that bordered the California collection garden, I noticed more than just flies were flying about around the blooming flowers. Besides the Pipevine swallowtails, there were a number of native bees and bumble bees visiting a multitude of flowers around me. I saw a few leaf cutter bees and what may have been a mason bee (both Megachilidae), in addition to all the much smaller bees that are a little more difficult to identify without a magnification lens. Other butterflies, such as the west coast lady (Vanessa annabella), buckeye (Junonia coenia), and the western tiger swallowtail (Papilio rutulus), were also seen but only as passer-byes. Had the temperature been just a bit warmer more insects would have been present I’m sure, but those will show up in due time. 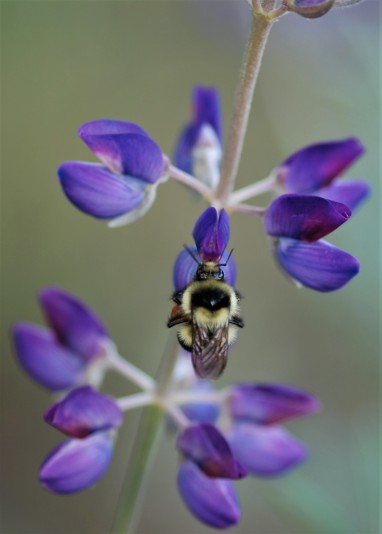 This bumble bee would not leave this lupine despite my advances for photographs.

The cool temperatures made these hover flies easy to approach.

This jumping spider (Salticidae) looked right at the camera at one point during this photoshoot.

Another bee mimicing hover fly (Syrphidae), but this time on an aster. 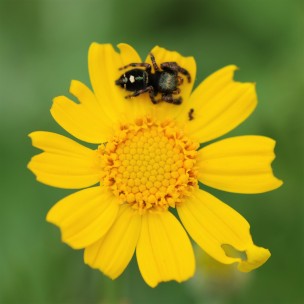 This was another Salticid species and had just finished feeding on the ant next to it.

These orange and black craneflies (Tipulidae) were a nice break from the boring common brown ones that seem to be everywhere this year.

After about two hours or so, the patchy cloud cover ended up leaving and the day turned out much better than expected. In short, the blooms that were happening in the Arboretum, will most likely continue for an extended period of time now that more rain is in the forecast for the coming weeks. This will give the insects more time to “catch up” with the blooming flowers and make for an amazing collecting/photographing season. The UC Davis Arboretum and Public Gardens is a wonderful place to visit if one is in need of some nearby “nature therapy” and I highly recommend others to take a walk through it when in the area. Spring has only just begun and I cannot wait to see what the days ahead will bring!

A Tachinid decided to moon me.

The cape bolsom was blooming all along the Arboretum nursery.

The garden near the gazebo was also quite pleasant.

The vivd purple made this flower stand out among the others around it.

These iris flowers were incredibly colorful!

My attempt at a wide angle macro shot with this fly.