While my trips to Arizona are mainly to survey the moth diversity of the southern region of the state, I had a second objective that involved some very colorful beetles. About ten years prior to my first Arizona expedition I visited the annual Bug Fair at the Los Angeles Museum of Natural History, and purchased a very shiny scarab beetle. Little did I know that this beetle was actually the glorious scarab beetle, otherwise known as Chrysina gloriosa. At the time I didn’t know anything about the species or where it came from, other than the fact that it can be found in the southwestern United States. In early 2014, before my first expedition to Arizona, I found out that there were three species of these Chrysina beetles that could be found in the southern region of the state. Once I learned which mountain ranges they could be found in, I set the destinations for the trip.

In Search of Stripes

The beetle itself was actually not that hard to find, all you really needed was a blacklight or mercury vapor light set up at night in the canyons where they can be found. The information I researched about the beetle had said that its host plant is Juniper trees and can be found within a number of different canyons at higher elevations in Arizona such as Madera Canyon, Box Canyon, Peña Blanca Canyon, and Garden Canyon. So, as a result, my first stop during my 2014 trip to Arizona was Madera Canyon. The beetle itself is exactly how its name portrays it to be, glorious, with silver stripes running down a beautifully metallic green body. Having this as my search image meant I was most certainly not going to have a hard time finding it, especially if they fly right into the blacklight sheet.

I had set up the mercury vapor light, with the help of my entomologist buddy Alex Nguyen, in a place near the entrance to Madera Canyon. At around 9 o’clock we started up the generator and the light began to slowly brighten, illuminating the surrounding area. Insects slowly began to fly into the sheet, including a Western Poplar Sphinx moth, which ended up being my first moth of the night and the first moth I had ever collected in southern Arizona. More moths began showing up to the light and about an hour into this event we heard a somewhat loud buzzing sound and then a thud right behind where we were sitting.

It ended up being a surprise appearance by a very large Chrysina beyeri, which I knew was another Chrysina species one could find out there but was unsure whether or not we would see it. Beyer’s jewel scarab is only known to be found in the Santa Rita, Patagonia, and Huachuca Mountains in Arizona and can also be found in the Animas Mountains of New Mexico. A fact that I recently came across was that the adults feed on the leaves of Mexican blue oak, Quercus oblongifolia, which made sense when I realized those oak trees were everywhere within the canyon. After another five minutes had passed, two more Beyeri showed up to the sheet and by the time we finished blacklighting, Beyer’s jewel scarab ended up being the most common and abundant Chrysina species of the night. 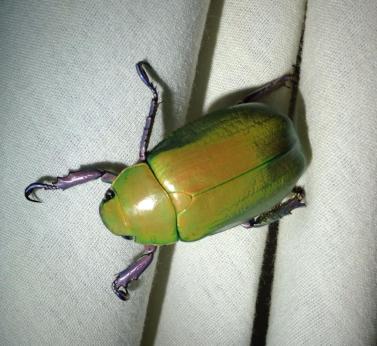 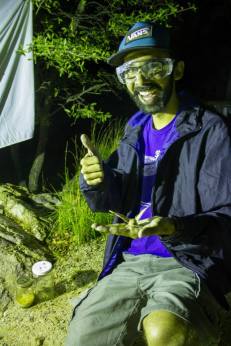 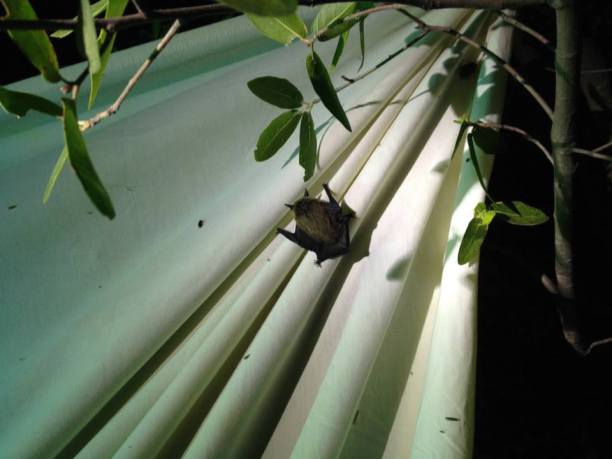 Apparently insects and entomologists weren’t the only things attracted to the sheet. This bat decided to take advantage of the insect buffet provided by the light. (Photo Credit: Alex Nguyen)

After about an hour into having the light up and running and a number of C. beyeri landing on the sheet, we heard another buzz and crash sound in the grass near the left side of the sheet. To my excitement, the star of the show had finally arrived, Chrysina gloriosa was here. Thankfully for my group and I that would not be the only specimen to show up on or near the sheet that night. Its bright metallic colors shined in the light from our headlamps and we could not believe how incredibly shiny this small creature was. One of my friends in the group ended up giving it the nickname “stripes” because of the stripes of silver along the top of the elytra.

Glorious jewel scarabs are commonly found in Arizona, New Mexico, and Texas, but can also be found farther south in the Mexican states of Chihuahua and Sonora, so long as their host plant is available. Finally being able to see these amazing insects in person was a somewhat surreal experience. When one finally sees these jewels for the first time, you almost forget you are still somewhere in the United States. Most beetles like these one can only find in the rain forests of Central and South America, so knowing they can be found somewhat close makes them a special find for any entomologist or insect enthusiast.

After my excitement to find these beetles had died down, I realized there was another species I had not found that can also be found with both the glorious jewel scarab and Beyer’s jewel scarab. Chrysina lecontei or LeConte’s jewel scarab was the third and final species that I needed to find in order to have seen all three species of Chrysina found in southern Arizona. I did some more research on this species and found out that it has the same range as the glorious jewel scarab but is more restricted to higher elevations because of its host plant Ponderosa pine. During the trip to Arizona in 2015 I tried my best to find this beetle but instead only came across C. beyeri and C. gloriosa and had to wait until 2016 to try again.

The one benefit of coming to southern Arizona and visiting Madera Canyon during the late summer is not only the huge amount of insect diversity, but also many different people you meet who have the same interests as you do. During my time in Madera Canyon on the 2016 trip I met a number of entomologists who were also in search of particular insects for their collections or photo books. One of those entomologists happened to know how to effectively find Chrysina lecontei and told me the exact location and time to set up the blacklight. He had apparently been visiting Madera Canyon for the last five years and knows exactly where to find many of the unique and amazing insects famously known to appear in the canyon, both during the day and at night. 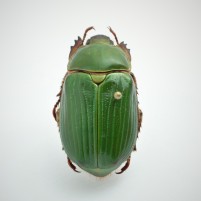 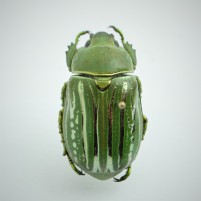 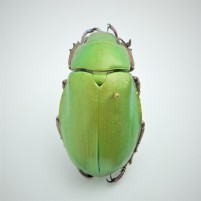 We proceeded to set up at exactly the right place and time our entomologist friend had told us to in order to find LeConte’s jewel scarab. He had specifically told us to set up our light and sheet around dusk, right as the sun went down, because this was when the beetle would show up. After turning on the light we waited only about five minutes before the first beetle showed up and after much anticipation, there was LeConte’s jewel scarab clinging to the sheet. It wasn’t long before more began to appear and it made my friends and I jump for joy knowing that we finally were able to see all three beetles at once in the same place. By the end of the night we had collected about 8 specimens between the four of us who were trying to find this beetle. More individuals of LeConte’s jewel scarab had arrived to the sheet later on, along with C. gloriosa and C. beyeri, but we had already collected what we needed by then. 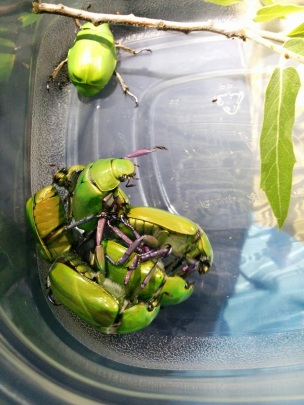 A horde of Beyer’s jewel scarab showed up to the sheet while we blacklighted in Madera Canyon. (Photo Credit: Melissa Cruz) 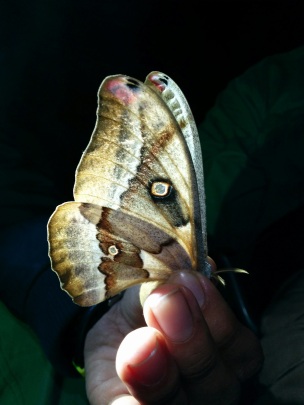 Another uncommon find near the blacklight in Madera Canyon was the Western Polyphemus Moth (Antheraea oculea). (Photo Credit: Melissa Cruz)

As an added bonus, my group and I managed to find a rare red morph of the glorious jewel scarab a few days earlier during our stay at Patagonia Lake State Park. This was something I was certainly not expecting to find at all, since a majority of the “red” morph glorious jewel scarabs are found in west Texas. The full red morph of this beetle can be found more frequently in the Davis Mountains of west Texas, but has been known to be found in southeastern Arizona as well. Even though finding this morph in Arizona happens every year by other insect collectors, it is still a rare form of C. gloriosa and I was glad to have both seen and collected one with this coloration. It turns out that there is also an even more rare “purple” morph which was found in southeastern Arizona in the Peloncillo Mountains near the AZ/NM border, of which there is only a single specimen ever collected.

In the three years I have gone on excursions to southern Arizona, I am always blown away by how incredibly cool it is to find these beetles there. Finding LeConte’s jewel scarab after visiting Arizona for the third time and finding the red morph of C. gloriosa showed me just how much I still have to look forward to when visiting this region. Every year I have gone I have always found something I have never seen before and I hope this trend continues for years to come. I also hope to find all three of these Chrysina species on future trips to southern region of Arizona so that I can share the excitement of finding these beautiful jewels with others.